PIP Implants: a problem in America, not just in France 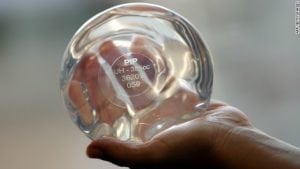 Last week Jean-Claude Mas, the founder of now-defunct breast implant manufacturer PIP, was arrested by French authorities.  His company, Poly Implant Prothese (PIP), was closed in March 2010 amid controversy.  He is accused of manslaughter and involuntary injuries caused by ruptured silicone PIP implants, which were made from industrial-grade silicone (designed for use in mattresses), rather than medical grade silicone.

PIP silicone gel implants have been used in over 300,000 breast augmentations worldwide since 1999, and there are currently investigations pending in France, England, Venezuela, and Brazil.  French authorities are recommending and paying for removal of PIP silicone gel implants in French women due to the very high rate of rupture and unknown risks of exposure to industrial-grade silicone.

How is this relevant to us in America?  I was listening to a report about PIP implants on National Public Radio last week, and the commentator assured the radio audience that no PIP implants were ever placed in the United States.  This is simply FALSE.  The reality is that although PIP silicone gel implants were never used, lots of PIP saline implants have been used in the U.S.–over 35,000 by some estimates.

PIP began selling saline implants in the US in 1996.  In 2000, the Food and Drug Administration (FDA) rejected the devices due to high deflation rates, manufacturing process violations, and a failure to demonstrate device safety.  Despite the FDA ban, PIP continued to sell their saline implants through its distributors, MediCor/Heritage Worldwide, until late 2002 or early 2003.  The FDA has received over 1,800 reports of problems with the PIP saline implants.  Most of the complaints concern an abnormally high product failure (deflation) rate.

While the PIP saline implants are not nearly as worrisome as the PIP silicone gel implants, this should serve as a cautionary tale for plastic surgeons, patients, and U.S. regulators.  How did PIP “slip through the cracks” for years after it was banned?

The only saline and silicone gel breast implants approved by the FDA for use in the US are manufactured by Allergan and Mentor. In the nearly 2500 breast augmentations that I have performed in the past 16 years, I have ALWAYS used implants made by Allergan or Mentor.  And yes, there are still unapproved manufacturers marketing breast implants in the United States.  Before you undergo breast augmentation, always know exactly what you are putting in your body.

With an office in Plano, our cosmetic surgery and plastic surgery services are also convenient to Frisco, Allen, and McKinney.